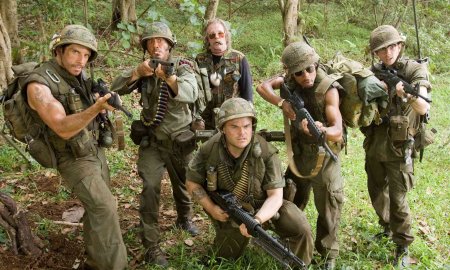 Gentlemen… Let’s get ourselves some Oscars! 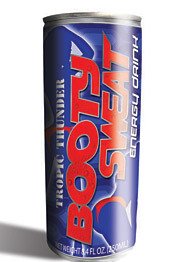 A funny updating of Galaxy Quest

(which itself was very funny), Ben Stiller’s Tropic Thunder moves its main characters from a sci-fi to a jungle setting, but the idea is the same: self-absorbed movie stars think they’re shooting a Vietnam war movie when in fact they really are at war. Naturally, this involves them getting into many dangerous situations where the threat of death is real, but they assume it’s just all part of the script. Sure, there’s some humor that can be milked from that particular cow, but what Stiller (as writer and director) does right is to focus on the peculiar traits of his characters and their various personality disorders, which is much more amusing in the long run. But also consider that what Stiller is doing here is similar to what he did in Zoolander

– tearing Hollywood and the world of celebrities a new asshole. For an action comedy picture, Tropic Thunder is surprisingly thoughtful.

The movie begins with previews, as all movies do, except that these are fake trailers (a la Grindhouse) that not only contain big laughs but also give insight into what roles each character has been typecasted into. Brandon T. Jackson’s character “Alpa Chino” (ripping on gangster rap’s fascination with Scarface

) has his own line of energy drinks (“Booty Sweat”). Jack Black’s “Jeff ‘Fats’ Portnoy” makes a living off comedies about a family of fat people who fart alot (ripping on Eddie Murphy’s The Nutty Professor

movies, natch). Fresh off Iron Man, Robert Downey Jr. plays “Kirk Lazarus”, the Australian actor who made a splash over the Brokeback Mountain 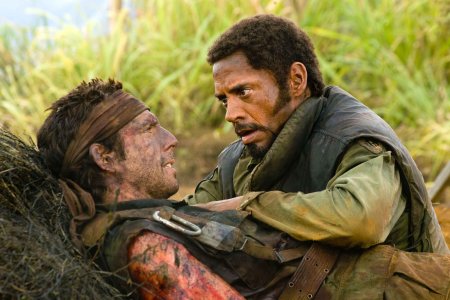 Speaking of Tom Cruise, he happens to be in this movie and has one of the most outrageous performances in it. Playing a bald, overweight, foul mouthed Hollywood producer, Cruise’s character lets loose with a tirade of profanities that are almost as astounding as the dancing he occasionally does to hip hop songs by Ludacris. He’s offensive, concerned only with the bottom line, and it’s the greatest thing I’ve seen him in since Michael Mann’s Collateral

. Is he spoofing Sumner Redstone? Who can say?

Probably the soon-to-be most talked about performance is Robert Downey Jr. As Kirk Lazarus, a “method” actor who really, really wants to get into his roles, he undergoes a controversial operation to darken his skin so that he may play one of the movie-within-the-movie’s black soldiers. Let me state for the record that I did not find this performance racist or a simple “minstrel” act in any way. First of all, RDJ’s skill at impersonation is truly amazing. Second, I think Stiller is taking Hollywood to task for its treatment of blacks. A black soldier is played by a white Australian – that’s easy to believe in a world where Angelina Jolie played Mariane Pearl. Thirdly, his Lazarus character is so mentally disturbed, such a blank canvas on which to paint whatever role he happens to be playing at the moment, that the character perhaps truly believes he is a black man (“I’m a dude playing a dude disguised as another dude!”) . This point is hammered home when he scolds a fellow actor “What do you mean… you people?”, only to be scolded at by the only real African American present played by Jackson (“What do you mean… you people?). Only able to recite stereotypical platitudes because that’s all he knows (probably too many movies), he is pitied by his fellow actors because they understand that he is an empty vessel searching for an identity. After all, last week he was a gay Irish priest. Stiller’s character goes through a similar predicament, at one point lapsing into the retarded character of his last film (a rip on Sean Penn’s I am Sam

, for sure). The confusion of multiple identities is at the heart of the problem with these two guys, and the movie suggests that to lose yourself too much in a role is to never completely escape from it. Whether this is true or not, only an actor can say, but I have always wondered about them. 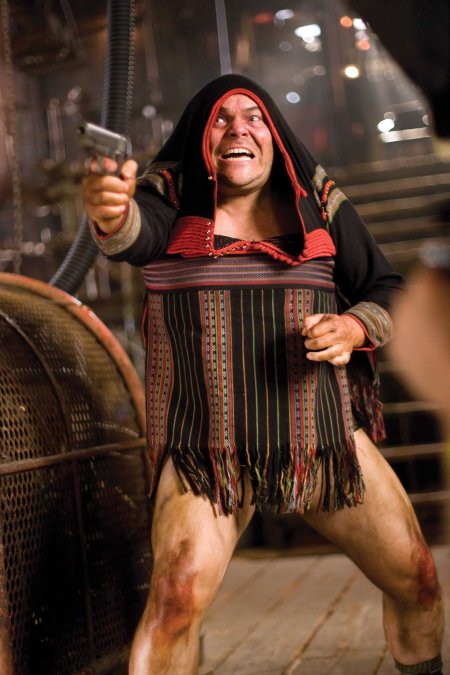 The movie isn’t perfect – Jack Black’s character is a little bit too one note, as he plays a heroin addict and tends to take the brunt of the abuse in the way Chris Farley did. The physical comedy only goes so far, although there is a fart joke at the end of the move that is actually funny. The Vietnam setting is a bit tired, the drug dealers serve no real purpose except as a general source of menace for our hero actors to play against, and I wasn’t sure whether or not a line was crossed regarding an Asian child being treated as a simple wild animal with a knife. (He’s thrown into the woods in slapstick fashion but comes out of it unharmed). Of course, I suppose that part of the movie’s “charm” is pushing certain boundaries, one of which I remember as being a bit icky – when the director (played by Steve Coogan) is accidentally blown up by a land mine, Speedman thinks it’s part of the act, grabs his severed head, and starts playing around with the entrails, thinking it’s a prop. There’s something ballsy about that kind of comedy, let me tell you. And it seems only Stiller would be ballsy enough to spoof Platoon

With interesting bit parts by Nick Nolte and Matthew McConaughey, it’s not quite as funny as Zoolander but it’s up there. Worth a look, as it offers something more than the simple dick jokes given to us by films like The Love Guru.

The Maeklong Railway Market In Thailand 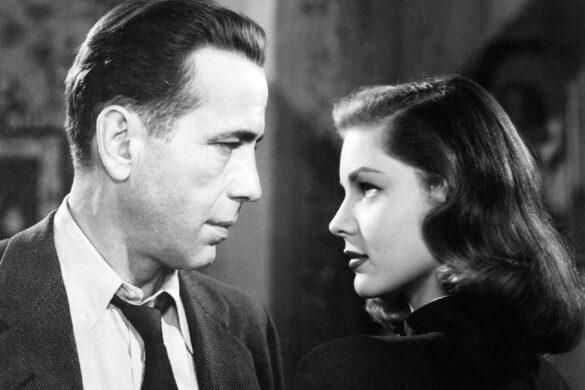 Top 10 Worst Movie Sequels Ever Made

Wagah Ceremony at the India-Pakistan Border