It’s like a movie – cop gone rogue. In this case, the disgruntled cop’s name is Christopher Dorner and so far he has already been linked to the deaths of 3 people. The reasons for what he is doing can be found in a manifesto he left behind on Facebook. 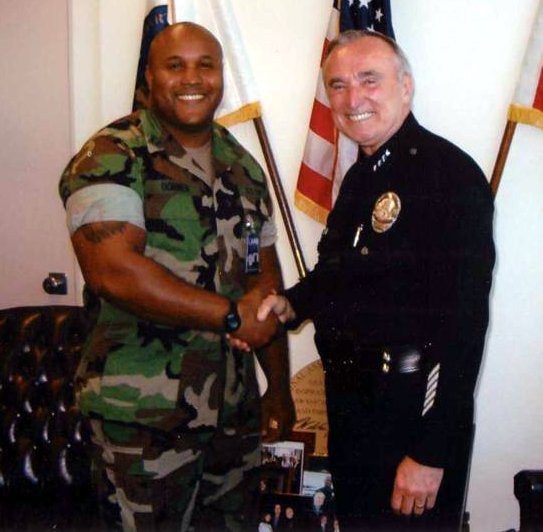 I know most of you who personally know me are in disbelief to hear from media reports that I am suspected of committing such horrendous murders and have taken drastic and shocking actions in the last couple of days. You are saying to yourself that this is completely out of character of the man you knew who always wore a smile wherever he was seen. I know I will be villified by the LAPD and the media.

Unfortunately, this is a necessary evil that I do not enjoy but must partake and complete for substantial change to occur within the LAPD and reclaim my name. The department has not changed since the Rampart and Rodney King days. It has gotten worse. The consent decree should never have been lifted. The only thing that has evolved from the consent decree is those officers involved in the Rampart scandal and Rodney King incidents have since promoted to supervisor, commanders, and command staff, and executive positions.

The question is, what would you do to clear your name?

The almost-entire Christopher Dorner Manifesto can be seen here. A shortened version can be downloaded here (pdf).

The short version of the manifesto is that Dorner was tired of the rampant racism, bullying tactics, and willful ignorance of the law that he saw during his years at the Los Angeles Police Department. Dorner writes that back in 2007, he witnessed Officer Teresa Evans using excessive force on a suspect, kicking him in the chest and face. He reported it, breaking the “blue line” as they call it. Not only did his superiors do nothing, but almost a year later he was relieved of duty by a board panel on which a friend of Officer Evans sat.

One event Dorner recalls is how he choked a fellow officer for using the n-word, writing “What I should have done, was put a Winchester Ranger SXT 9mm 147 grain bullet in his skull.” Some other tidbits of information: Dorner would strike those who hurled racist epithets at him but not before; apparently Officer Evans was known as Chupacabra, something that amused her.

I’m not an aspiring rapper, I’m not a gang member, I’m not a dope dealer, I don’t have multiple babies momma’s. I am an American by choice, I am a son, I am a brother, I am a military service member, I am a man who has lost complete faith in the system, when the system betrayed, slandered, and libeled me. I lived a good life and though not a religious man I always stuck to my own personal code of ethics, ethos and always stuck to my shoreline and true North. I didn’t need the US Navy to instill Honor, Courage, and Commitment in me but I thank them for re-enforcing it. It’s in my DNA.

Self Preservation is no longer important to me. I do not fear death as I died long ago on 1/2/09. I was told by my mother that sometimes bad things happen to good people. I refuse to accept that. From 2/05 to 1/09 I saw some of the most vile things humans can inflict on others as a police officer in Los Angeles. Unfortunately, it wasn’t in the streets of LA. It was in the confounds of LAPD police stations and shops (cruisers). The enemy combatants in LA are not the citizens and suspects, it’s the police officers.

This department has not changed from the Daryl Gates and Mark Fuhrman days. Those officers are still employed and have all promoted to Command staff and supervisory positions. I will correct this error. Are you aware that an officer (a rookie/probationer at the time) seen on the Rodney King videotape striking Mr. King multiple times with a baton on 3/3/91 is still employed by the LAPD and is now a Captain on the police department? Captain Rolando Solano is now the commanding officer of a LAPD police station (West LA division). As a commanding officer, he is now responsible for over 200 officers. Do you trust him to enforce department policy and investigate use of force investigations on arrestees by his officers?

Then Dorner declares war on his fellow officers (and their families), calling them “high value targets”:

I am here to change and make policy. The culture of LAPD versus the community and honest/good officers needs to and will change. I am here to correct and calibrate your morale compasses to true north.

He then pleads with citizens not to interfere and not to assist downed officers, saying that they would not do the same if the situation was reversed, and “Let the balance of loss of life take place. Sometimes a reset needs to occur.”

There are lots of disturbing things here. His use of the Thomas Jefferson quote about “refreshing the tree of liberty with the blood of patriots and tyrants” and how he thinks it applies to the LAPD (but he supports the US Government – no doubt his experience in the US Navy was more positive than in the force). His description of his training and how he will use it to get to his targets (chilling). Then he talks about gun control in a bizarre rant, talks about President Obama, and a story about his high school. He also wants his “brain preserved for science/research to study the effects of severe depression on an individual’s brain.” The rest reads off like a suicide note, as he says goodbye to his friends. Oh, and the occasional WTF sidenote, like:

It’s kind of sad I won’t be around to view and enjoy The Hangover III. What an awesome trilogy. Todd Phillips, don’t make anymore Hangovers after the third, takes away the originality of its foundation. World War Z looks good and The Walking Dead season 3 (second half) looked intriguing. Damn, gonna miss shark week.

After that, he gives little messages to politicians like VP Biden (urging him to ban assault weapons), Hillary Clinton (asking her to run for President), Governor Christie, NRA Prez LaPierre (calling him a “vile and inhumane piece of shit. May all of your immediate and distant family die horrific deaths in front of you.”), then some media faces like Chris Matthews, Joe Scarborough, Wolf Blitzer, Anderson Cooper. He also demands that Fareed Zakaria be deported and Piers Morgan be given a resident alien and Visa card.

Last Sunday, Monica Quan and her fiancé, Keith Lawrence, were found shot in their car near their condo in Irvine, CA. Irvine police read Dorner’s Facebook rant, which mentions Randy Quan, former LAPD officer and Dorner’s former attorney, who Dorner felt betrayed him. Monica was Randy’s daughter. Later, an officer was killed by a motorist with a rifle (believed to be Dorner) and another was wounded seriously.

Dorner is now the subject of a heavy southern California manhunt. People are urged to call 911 if he is spotted. Police Chief Charlie Beck said at a news conference:

“Of course he knows what he’s doing; we trained him. He was also a member of the Armed Forces. It is extremely worrisome and scary.”

The LAPD is getting jittery. In Torrance, two women in a truck (said to match the one Dorner is supposedly driving) were shot by police in an act of mistaken identity (apparently without any warning). The women, who were delivering newspapers, were taken to a hospital. In another incident, officers fired on another truck which turned out not to be the vehicle they were looking for. Fortunately, in that instance, the driver was not hit. 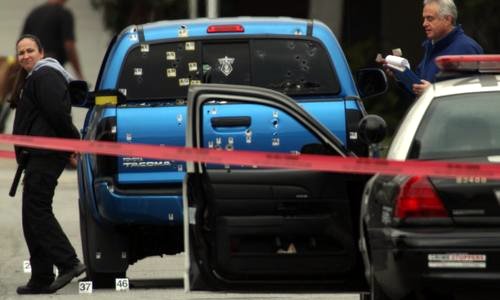 Well stated by Boy With Grenade:

If you live in Southern California and own any kind of vehicle that resembles Christopher Dorner’s truck, I suggest you stay indoors. Otherwise, cops will just unload a hail of bullets on you like they did today in Torrance.

On the radio this morning, people in the areas of the manhunt were urged not to answer the door to any strangers, unless they were wearing police uniforms. However, it was stated that Dorner is believe to be in possession of his police uniform. And, of course, you have incidents like the ones above, so we suggest not answering the door to anyone. In fact, you should probably just leave town.

The resort of Big Bear was put on lockdown around the same time Dorner’s torched truck was discovered along a forest road nearby. CNN’s Anderson Cooper reportedly received a package from Dorner, which included a special coin handed out by the police chief (which was shot up) and the note “Thanks, but no thanks Will Bratton.”

At this point, all we can say is that we have been unimpressed with the Los Angeles Police Department.

The word is that the police are using drones to try to find Dorner. (source)

“If you are stopped or confronted by officers, cooperate and follow instructions. Do not escalate the situation by becoming argumentative, belligerent or non-compliant. The consequences of failure to comply are high for everyone involved, citizens, and law enforcement officers included.” 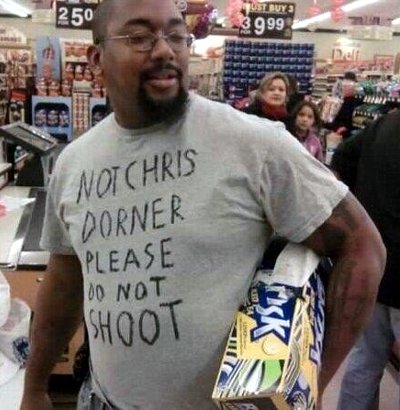 After a huge firefight, police surrounded Dorner inside a cabin near the intersection of Highway 38 and Jenks Lake Rd E, outside of Big Bear. Police reportedly fired tear gas canisters (“burners”) which caused the cabin to go up in flames, apparently killing Dorner.

A suspect they believe is Dorner entered the cabin and did not come out as it burned to the ground. “We believe that he was still inside the cabin [as it burned down], yes,” Bachman said.

The earlier shootout ended with two deputies shot; one of them died later, increasing the number of Dorner’s victims to 4. Audio recordings of the event suggest that police intended to burn the cabin down, with one officer saying “f**king burn this motherf**ker” and another saying “go ahead with the plan with the burners.”