Here’s some more evidence that news anchors are mostly line-reading zombies. KTVU Channel 2, the Fox-affiliated TV station serving the San Francisco area, has apologized for an on-air “gaffe” which happened during a lunchtime newscast, in which KTVU anchor Tori Campbell announced fake Asian pilots names. If you recall, this is related to the accident onboard Asiana flight 214, which crash-landed at SF International airport last weekend. Three people have died from that crash, and there’s nothing funny about that. However, we couldn’t help but chuckle when Campbell – probably channeling anchorman Ron Burgundy, announced the following:

“KTVU has just learned the names of the four pilots who were on board the flight. They are Captain Sum Ting Wong, Wi Tu Lo, Ho Lee Fuk, and Bang Dig Ow. The NTSB has confirmed these are the names of the pilots on flight 214 when it crashed. We are working to determine exactly what roles each of them played during the landing on Saturday.” 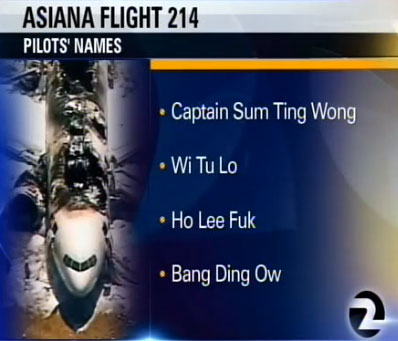 Here’s the video for those who have trouble believing it:

Read those names out loud and ask yourself: wouldn’t you have realized you were being punked as soon as you read “Captain Sum Ting Wong?” Well, most people would – we hope! But not only did Tori Campbell not give any indication that she wasn’t on autopilot, somebody made the damn graphic! And whoever wrote the story had the gall to claim that the names were confirmed with the National Transportation Safety Board. Seriously?

“Nothing is more important to us than having the highest level of accuracy and integrity, and we are reviewing our procedures to ensure this type of error does not happen again.”